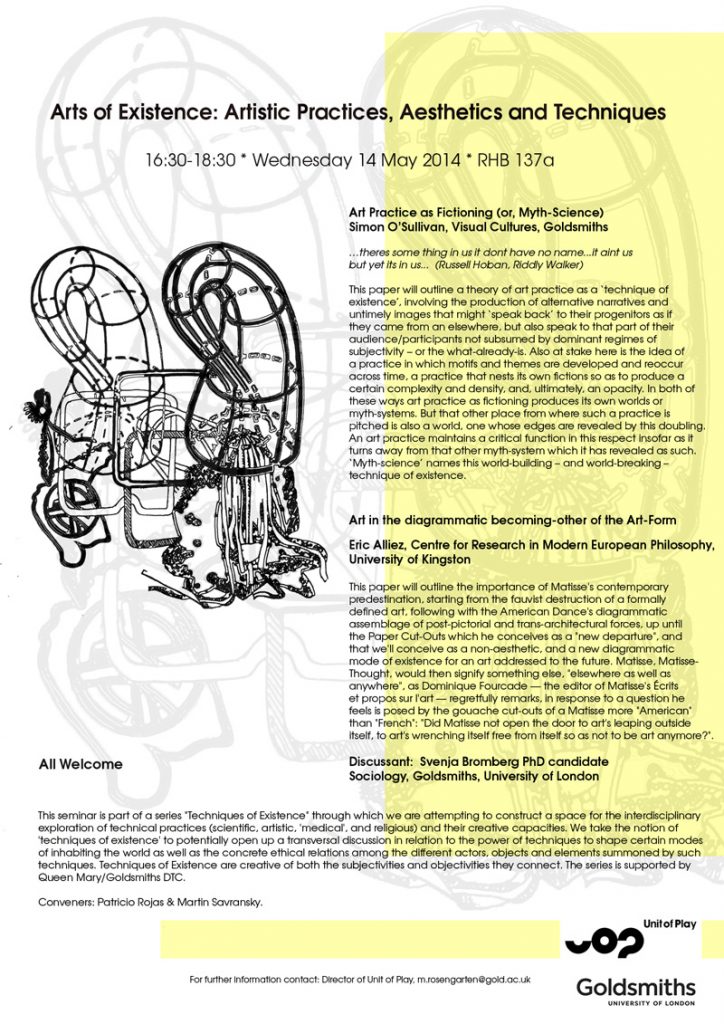 …theres some thing in us it dont have no name…it aint us but yet its in us… (Russell Hoban, Riddly Walker)

This paper will outline a theory of art practice as a ‘technique of existence’, involving the production of alternative narratives and untimely images that might ‘speak back’ to their progenitors as if they came from an elsewhere, but also speak to that part of their audience/participants not subsumed by dominant regimes of subjectivity – or the what-already-is. Also at stake here is the idea of a practice in which motifs and themes are developed and reoccur across time, a practice that nests its own fictions so as to produce a certain complexity and density, and, ultimately, an opacity. In both of these ways art practice as fictioning produces its own worlds or myth-systems. But that other place from where such a practice is pitched is also a world, one whose edges are revealed by this doubling. An art practice maintains a critical function in this respect insofar as it turns away from that other myth-system which it has revealed as such. ‘Myth-science’ names this world-building – and world-breaking – technique of existence.

Art in the diagrammatic becoming-other of the Art-Form , Eric Alliez (Centre for Research in Modern Eurpoean Philosophy, Kingston University)

This paper will outline the importance of Matisse’s contemporary predestination, starting from the fauvist destruction of a formally defined art, following with the American Dance’s diagrammatic assemblage ofpost-pictorial and trans-architectural forces, up until the Paper Cut-Outs which he conceives as a “new departure”, and that we’ll conceive as a non-aesthetic, and a new diagrammatic mode of existence for an art addressed to the future. Matisse, Matisse-Thought, would then signify something else, “elsewhere as well as anywhere”, as Dominique Fourcade — the editor of Matisse’s Écrits et propos sur l’art — regretfully remarks, in response to a question he feels is posed by the gouache cut-outs of a Matisse more “American” than “French”: “Did Matisse not open the door to art’s leaping outside itself, to art’s wrenching itself free from itself so as not to be art anymore?”.