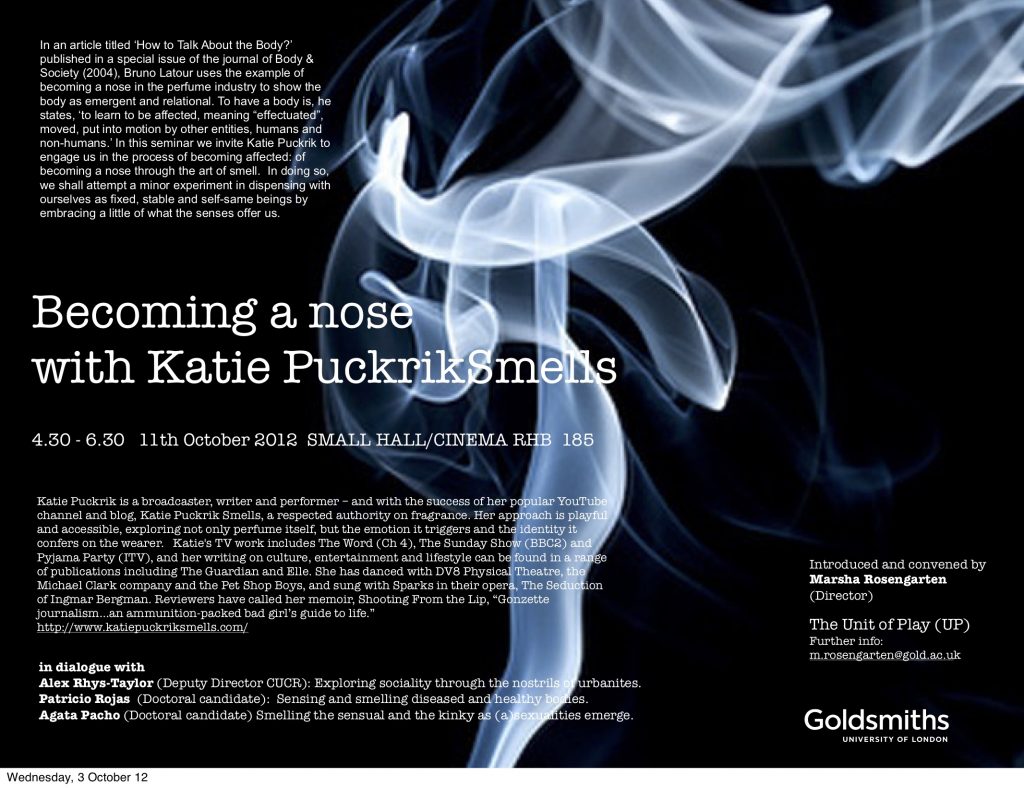 Katie Puckrik Smells in dialogue with:

In an article titled ‘How to Talk About the Body? published in a special issue of the journal of Body & Society (2004), Bruno Latour uses the example of becoming a nose in the perfume industry to show the body as emergent and relational. To have a body is, he states, ‘to learn to be affected, meaning “effectuated”, moved, put into motion by other entities, humans and non-humans.’ In this seminar we invite Katie Puckrick to engage us in the process of becoming affected: of becoming a nose through the art of smell. In doing so, we shall attempt a minor experiment in dispensing with ourselves as fixed, stable and self-same beings by embracing a little of what the senses offer us.

Katie Puckrik is a broadcaster, writer and performer – and with the success of her popular YouTube channel and blog, Katie Puckrick Smells, a respected authority on fragance. Her approach is playful and accessible, exploring not only perfume itself, but the emotion it triggers and the identity it confers on the wearer. Katie’s TV work includes The Word (Ch 4), The Sunday Show (BBC2) and Pyjama Party (ITV), and her writing on culture, entertainment and lifestyle can be found in a range of publications including The Guardian and Elle. She has dances with DV8 Physical Theatre, the Michael Clark company and the Pet Shop Boys, and sung with Sparks in their opera, The Seduction of Ingmar Bergman. Reviewers have called her memoir, Shooting From the Lip, “Gonzette journalism… an ammunition-packed bad girl’s guide to life.”