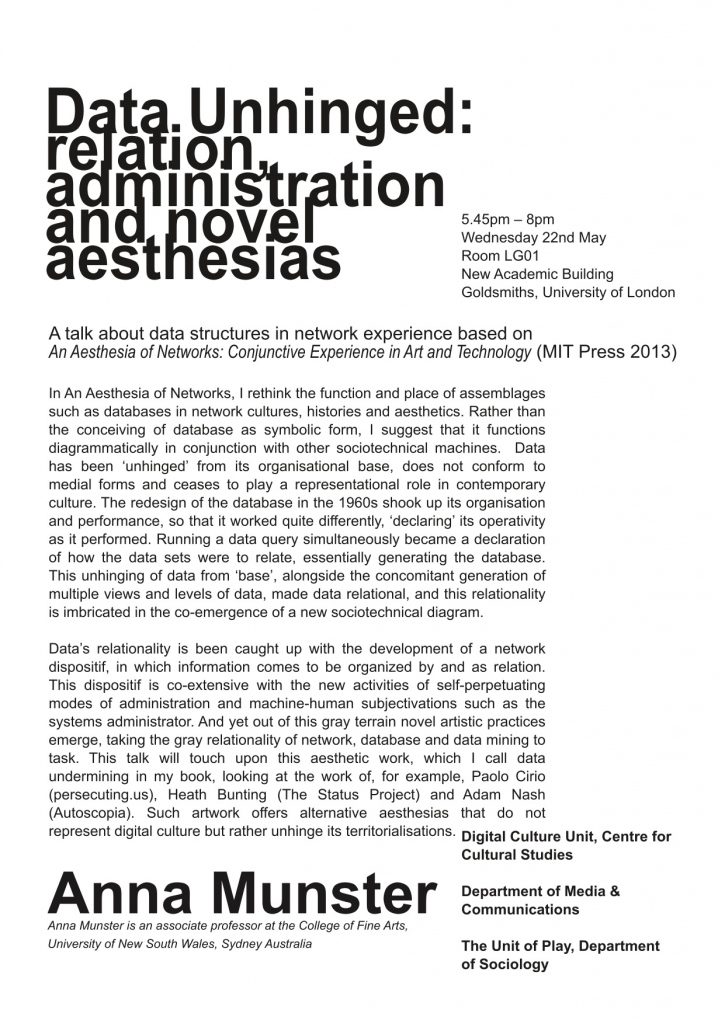 A talk about data structures in network experience based on Anna Munster’s An Aesthesia of Networks: Conjunctive Experience in Art and Technology (MIT Press, 2013)

In An Aesthesia of Networks, I rethink the function and place of assemblages such as databases in network cultures, histories and aesthetics. Rather than the conceiving of database as symbolic form, I suggest that it functions diagrammatically in conjunction with other sociotechnical machines. Data has been ‘unhinged’ from its organisational base, does not conform to medial forms and ceases to play a representational role in contemporary culture. The redesign of the database in the 1960s shook up its organisation and performance, so that it worked quite differently, ‘declaring’ its operativity as it performed. Running a data query simultaneously became a declaration of how the data sets were to relate, essentially generating the database. This unhinging of data from ‘base’, alongside the concomitant generation of multiple views and levels of data, made data relational, and this relationality is imbricated in the co-emergence of a new sociotechnical diagram. Data’s relationality is been caught up with the development of a network dispositif, in which information comes to be organized by and as relation. This dispositif is co-extensive with the new activities of self-perpetuating modes of administration and machine-human subjectivations such as the systems administrator. And yet out of this gray terrain novel artistic practices emerge, taking the gray relationality of network, database and data mining to task. This talk will touch upon this aesthetic work, which I call data undermining in my book, looking at the work of, for example, Paolo Cirio (persecuting.us), Heath Bunting (The Status Project) and Adam Nash (Autoscopia). Such artwork offers alternative aesthesias that do not represent digital culture but rather unhinge its territorialisations.

Bio: Anna Munster is a writer, artist and educator. Her new book, An Aesthesia of Networks (MIT Press, 2013), explores novel expressions of networks beyond the‘link-node’ image and new understandings of experience that account for the complexity of contemporary assemblages between humans and nonhuman technics. She is also the author of Materializing New Media (Dartmouth College Press, 2006).

‘From a Biopolitical Will to Life to a Noopolitical Ethos of Death in the Aesthetics of Digital Code’ (2011), Theory, Culture and Society, 28, 6.