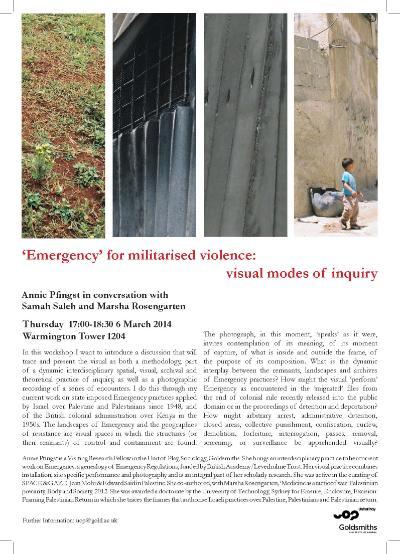 Annie Pfingst in conversation with Samah Saleh and Marsha Rosengarten

In this workshop I want to introduce a discussion that will trace and present the visual as both a methodology, part of a dynamic interdisciplinary spatial, visual, archival and theoretical practice of inquiry, as well as a photographic recording of a series of encounters. I do this through my current work on state imposed Emergency practices applied by Israel over Palestine and Palestinians since 1948, and of the British colonial administration over Kenya in the 1950s. The landscapes of Emergency and the geographies of resistance are visual spaces in which the structures (or their remnants) of control and containment are found. The photograph, in this moment, ‘speaks’ as it were, invites contemplation of its meaning, of its moment of capture, of what is inside and outside the frame, of the purpose of its composition. What is the dynamic interplay between the remnants, landscapes and archives of Emergency practices? How might the visual ‘perform’ Emergency as encountered in the ‘migrated’ files from the end of colonial rule recently released into the public domain or in the proceedings of detention and deportation? How might arbitrary arrest, administrative detention, closed areas, collective punishment, confiscation, curfew, demolition, forfeiture, interrogation, passes, removal, screening, or surveillance be apprehended visually?

Bio: Annie Pfingst is a Visiting Research Fellow in the Unit of Play, Sociology, Goldsmiths. She brings an interdisciplinary practice to her current work onEmergency: a genealogy of Emergency Regulations, funded by British Academy/Leverhulme Trust. Her visual practice combines installation, site specific performance and photography and is an integral part of her scholarly research. She was active in the curating of SPACE & GAZE: Jean Mohr & Edward Said in Palestine. She co-authored, with Marsha Rosengarten, ‘Medicine as a tactic of war: Palestinian precarity, Body and Society, 2012. She was awarded a doctorate by the University of Technology, Sydney for Erasure, Enclosure, Excision: Framing Palestinian Returnin which she traces the frames that authorise Israeli practices over Palestine, Palestinians and Palestinian return.