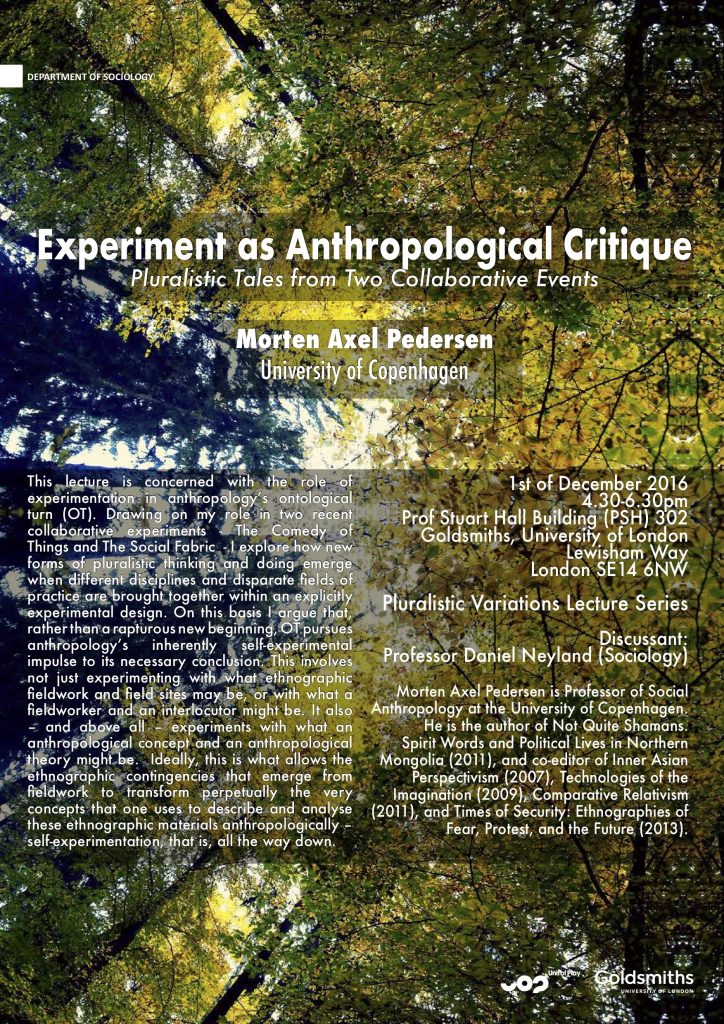 This lecture is concerned with the role of experimentation in anthropology’s ontological turn (OT). Drawing on my role in two recent collaborative experiments – the Comedy of Things and the Social Fabric – I explore how new forms of pluralistic thinking and doing emerge when different disciplines and disparate fields of practice are brought together within an explicitly experimental design.On this basis I argue that, rather than a rapturous new beginning, OT pursues anthropology’s inherently self-experimental impulse to its necessary conclusion. This involves not just experimenting with what ethnographic fieldwork and field sites may be, or with what a fieldworker and an interlocutor might be. It also – and above all – experiments with what an anthropological concept and an anthropological theory might be. In taking postmodernist anthropology’s call for reflexivity and cultural critique to the extreme, OT thus allows for an experimental extension of anthropology’s self-experimental habitus from the so-called ethnographic dimension of ‘the field’ into the so-called theoretical dimension of ‘analysis’ itself (which is another way of saying that OT amounts to a sustained experiment with what a concept, and indeed an experiment, could be). By treating what is sometimes imagined as spatio-temporally distinct empirical and theoretical ‘stages’ of anthropological research as analogous components of one undifferentiated ethnographic procedure, OT takes the injunction towards anthropological (self) experimentation to its endpoint. As such, OT transforms cultural critique into conceptual creativity without losing its critical edge and reflexive impetus. For ontologically inclined anthropologists seek to render their own thoughts (and thus their own concepts) subject to the same degree – and ideally, the same kind – of experimental intervention as subjects whose social life they study in their field sites, including their own life as ethnographic fieldworkers. Ideally, this is what allows the ethnographic contingencies that emerge from fieldwork to transform perpetually the very concepts that one uses to describe and analyse these ethnographic materials anthropologically – self-experimentation, that is, all the way down.