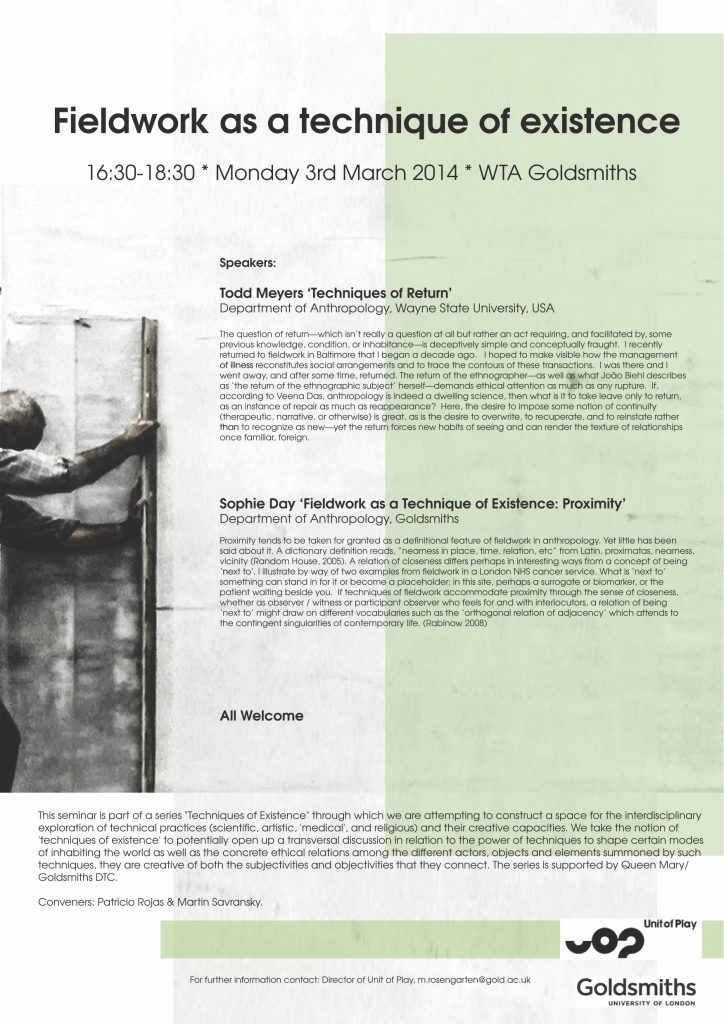 The question of return––which isn’t really a question at all but rather an act requiring, and facilitated by, some previous knowledge, condition, or inhabitance––is deceptively simple and conceptually fraught. I recently returned to fieldwork in Baltimore that I began a decade ago. Over the course of four years I followed one woman through clinic visits, hospitalizations, and the care of her grandchildren, adult children, and ailing mother. I hoped to make visible how the management of illness reconstitutes social arrangements and to trace the contours of these transactions as they take shape between biomedical and domestic spheres. I was there and I went away, and after some time, returned. The return of the ethnographer––as well as what João Biehl describes as ‘the return of the ethnographic subject’ herself––demands ethical attention as much as any rupture. If, according to Veena Das, anthropology is indeed a dwelling science, then what is it to take leave only to return, as an instance of repair as much as reappearance? Here, the desire to impose some notion of continuity (therapeutic, narrative, or otherwise) is great, as is the desire to overwrite, to recuperate, and to reinstate rather than to recognize as new––yet the return forces new habits of seeing and can render the texture of relationships once familiar, foreign.

Fieldwork as a Technique of Existence: Proximity

Proximity tends to be taken for granted as a definitional feature of fieldwork in anthropology, or simply assumed in practice. Given the attention devoted to associated techniques of arrival and departure, being here and being there, the coeval, or in still other formulations, the many explorations of self/other such as being both at home and a stranger in fieldwork, it is striking that so little has been said about proximity. A succinct dictionary definition reads, “nearness in place, time, relation, etc” from Latin,proximatas, nearness, vicinity (Random House, 2005). However, a relation of closeness, which I consider to be the default connotation in fieldwork, differs perhaps in interesting ways from a concept of being ‘next to’. I illustrate by way of two examples from fieldwork in a London NHS cancer service. To put it crudely, the first draws on the ‘spaces’ of neighbourhood, an uncomfortable togetherness in waiting which nonetheless elicits relations of care, often through a mutuality of relations. The second draws on causal relations in ‘times’, such as those associated with biomedical research in modeling proximate relations. What is ‘next to’ something can stand in for it or become a placeholder; in this site, perhaps a surrogate or biomarker, or the patient waiting beside you. This next-to relation serves as a proxy measure of an association, which you can ‘play with’, change or see if it might serve as ‘sufficient’ cause, like PSA for prostate cancer. Both examples ask what goes or moves with what. These and other examples suggest complexities and a variety of connotations to the term. If techniques of fieldwork accommodate proximity through the sense of closeness, whether as observer / witness or participant observer who feels for and with interlocutors, a relation of being ‘next to’ might draw on different vocabularies such as the ‘orthogonal relation of adjacency’ which attends to the contingent singularities of contemporary life. (Rabinow 2008)