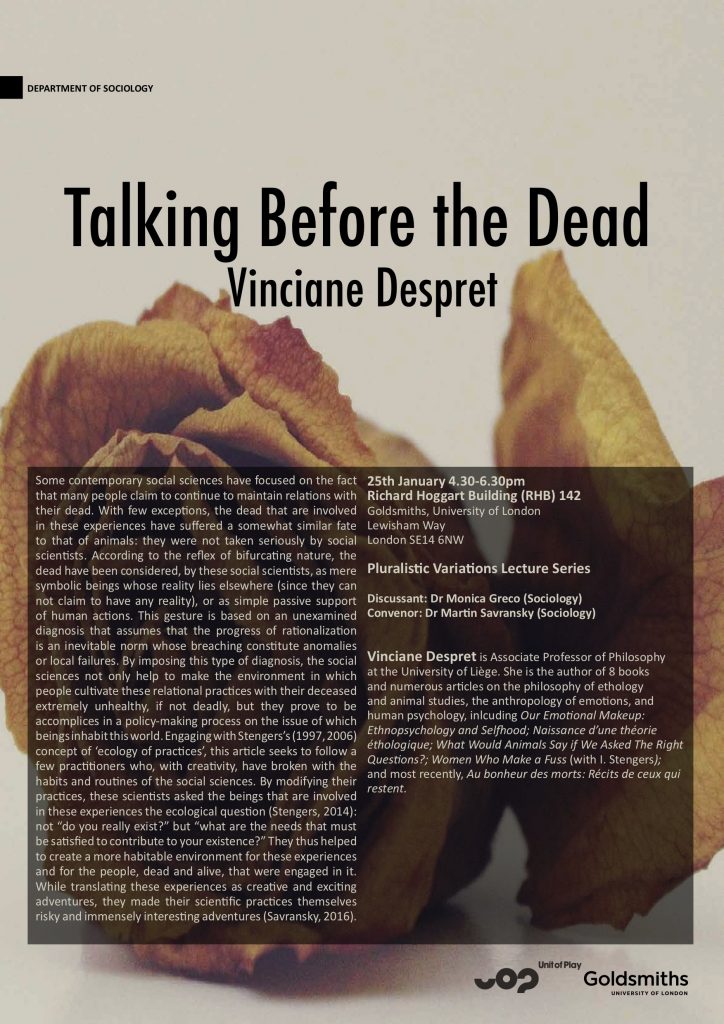 Some contemporary social sciences have focused on the fact that many people claim to continue to maintain relations with their dead. With few exceptions, the dead that are involved in these experiences have suffered a somewhat similar fate to that of animals: they were not taken seriously by social scientists. According to the reflex of bifurcating nature, the dead have been considered, by these social scientists, as mere symbolic beings whose reality lies elsewhere (since they can not claim to have any reality), or as simple passive support of human actions. This gesture is based on an unexamined diagnosis that assumes that the progress of rationalization is an inevitable norm whose breaching constitute anomalies or local failures. By imposing this type of diagnosis, the social sciences not only help to make the environment in which people cultivate these relational practices with their deceased extremely unhealthy, if not deadly, but they prove to be accomplices in a policy-making process on the issue of which beings inhabit this world. Engaging with Stengers’s (1997, 2006) concept of ‘ecology of practices’, this article seeks to follow a few practitioners who, with creativity, have broken with the habits and routines of the social sciences. By modifying their practices, these scientists asked the beings that are involved in these experiences the ecological question (Stengers, 2014): not “do you really exist?” but “what are the needs that must be satisfied to contribute to your existence?” They thus helped to create a more habitable environment for these experiences and for the people, dead and alive, that were engaged in it. While translating these experiences as creative and exciting adventures, they made their scientific practices themselves risky and immensely interesting adventures (Savransky, 2016).

Vinciane Despret is Associate Professor of Philosophy at the University of Liège. She is the author of 8 books and numerous articles on the philosophy of ethology and animal studies, the anthropology of emotions, and human psychology, onheurg Our Emotional Makeup: Ethnopsychology and Selfhood; Naissance d’une théorie éthologique; What Would Animals Say if We Asked The Right Questions?; Women Who Make a Fuss (with I. Stengers); and most recently, Au onheur des morts: Récits de ceux qui restent.