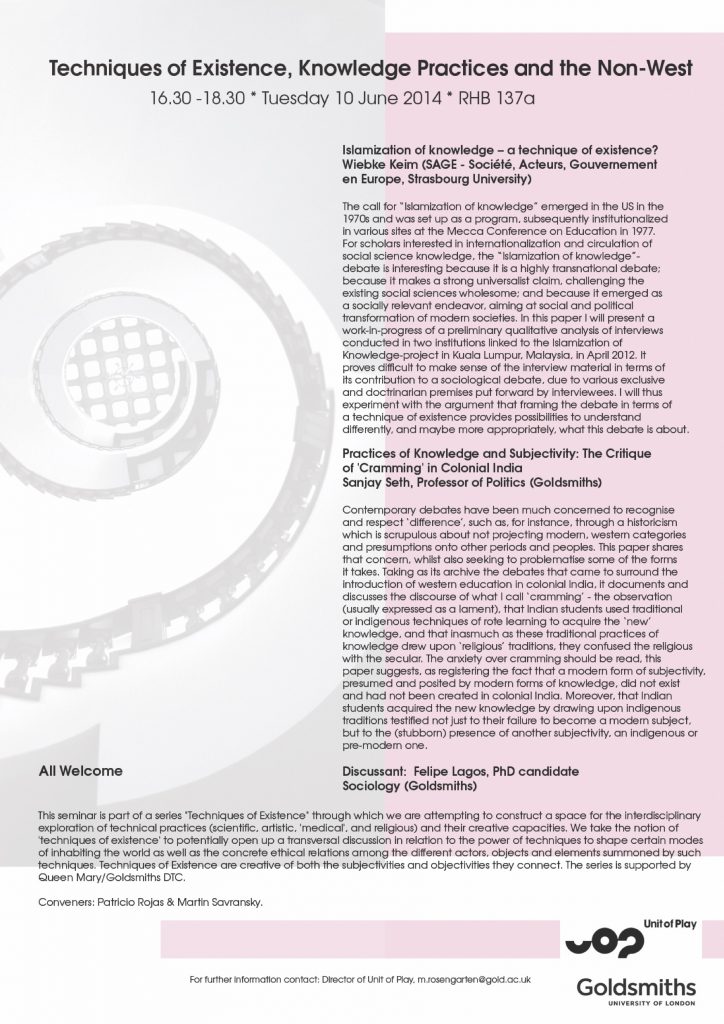 Islamization of knowledge—a technique of existence?

The call for “Islamization of knowledge” emerged in the US in the 1970s and was set up as a program, subsequently institutionalized in various sites, at the Mecca Conference on Education in 1977. For scholars interested in internationalization and circulation of social science knowledge, the “Islamization of knowledge”-debate is interesting because it is a highly transnational debate; because it makes a strong universalist claim, challenging the existing social sciences wholesome; and because it emerged as a socially relevant endeavor, aiming at social and political transformation of modern societies. In this paper I will present a work-in-progress of a preliminary qualitative analysis of interviews conducted in two institutions linked to the Islamization of Knowledge-project in Kuala Lumpur, Malaysia, in April 2012. It proves difficult to make sense of the interview material in terms of its contribution to a sociological debate, due to various exclusive and doctrinarian premises put forward by interviewees. I will thus experiment with the argument that framing the debate in terms of a technique of existence provides possibilities to understand differently, and maybe more appropriately, what this debate is about.

Practices of Knowledge and Subjectivity: The Critique of ‘Cramming’ in Colonial India

Contemporary debates have been much concerned to recognise and respect ‘difference’, such as, for instance, through a historicism which is scrupulous about not projecting modern, western categories and presumptions onto other periods and peoples. This paper shares that concern, whilst also seeking to problematise some of the forms it takes. Taking as its archive the debates that came to surround the introduction of western education in colonial India, it documents and discusses the discourse of what I call ‘cramming’ – the observation (usually expressed as a lament), that Indian students used traditional or indigenous techniques of rote learning to acquire the ‘new’ knowledge, and that inasmuch as these traditional practices of knowledge drew upon ‘religious’ traditions, they confused the religious with the secular. The anxiety over cramming should be read, this paper suggests, as registering the fact that a modern form of subjectivity, presumed and posited by modern forms of knowledge, did not exist and had not been created in colonial India. Moreover, that Indian students acquired the new knowledge by drawing upon indigenous traditions testified not just to their failure to become a modern subject, but to the (stubborn) presence of another subjectivity, an indigenous or pre-modern one.